Will Nave - The Texas Blades​mith

Currently, he has so many orders that he is not accepting orders.  When he completes his list, he prefers to only make what suits him at the time and then offer it up for sale.  You can, however, have your name added to a list to be tagged on Facebook when one becomes available.

I am constantly amazed by my son and how his skill has developed over the years.  Below you will find some of his most recent knives from late 2018 thru now..

SOME OF HIS EARLY KNIVES AND BLACKSMITHING ENDEAVORS

In November of 2014, my 10 yr old son said, "Mom, every redneck boy needs to know how to pound steel.  Would you teach me how to be a blacksmith?"  And naturally, I replied, "We will learn together".

We had been acquiring the equipment for some time because my husband and I had a bit of interest in blacksmithing.  So with Will's interest, I proceeded to plan some "B" Days as my son calls the days we fire up the forge for Blacksmithing.

We we haven't carried it very far yet, but he has made a couple knives out of RR Spikes, and a few machetes from lawn mower blades.  He got pretty good at making Fajita Flippers from 1/4" square steel.  He adds a deer antler handle and sells them for $15.  All the the proceeds from our blacksmithing endeavor go toward his dirt bike/4-wheeler habit.  He is still interested in blacksmithing, however, his focus is now on making knives by stock removal.

If you know anything about blacksmithing or knife making and want to pass on some of your knowledge to an enthuastic kid, please let me know.  We will schedule a day where you can come show us a few tricks.  We sure could use some hands on training.

Since the blacksmithing began, he has also started making knives from old table saw blades (he started this at 11 years old - 2015).  He has gotten pretty good at this and gets better with every knife.  He has a great eye for shape and form and is always careful not to let the steel get too hot in the grinding process.

To encourage him, I purchased a plasma cutter for cutting out the handles and spine of the knife.  He refuses to cut the blade portion with the plasma because he doesn't want to get it too hot.  (Smart Boy).  Now, he seldom uses the plasma cutter and cuts them all out with the chop saw or angle grinder.

When I had a booth at a Gun Show (March 2016) he took orders for his knives.  He has since decided that he prefers to make whatever style excites him at a particular time, and then offer it for sell.  I always post pictures on Facebook.  So, if you want one, that is a good place to watch.

Fall 2016- when all the other 12 year old boys were playing video games and watching TV during fall break, my boy was making knives. In 5 days, he and his buddies made 12 knives.

I believe he might be the only 12 year old boy who makes a $200 a month dirt bike payment earning the money himself selling knives.  During the Christmas season, he had over a dozen orders which should put him really close to paying off his dirtbike.  Next on his list is a 2x72" knife makers sander/grinder.   Update: He purchased his 2x72 custom made grinder in February of 2017.

In February 2017 (12 years old) he paid off his dirt bike and ordered his custom made 2x72" knife grinder from John Carman in Houston.  I believe he is now the happiest kid in the whole world.  During spring break he is determined to finish all his current orders so that he can focus on making only what he wants to make.  Tommy Allen at Interstate Rental in Kingsville offered him a free booth at the South Texas Gun Show in July and he plans to have 50 knives ready for sale there.  He is one determined kid.   With the advent of the 2x72 grinder, he is going to start putting a makers mark on his knives and keep track of every knife he makes.

Update: He had 25 knives for the gun show (July 2017).  He was the only kid who had their own booth and the only person there who completely sold out.  He also came home with orders for over a dozen more knives.

Right after his 13th birthday, he decided he was saving for a truck.  It didn’t take him long.  By the end of the summer he purchased a 1972 Dodge 300 Custom with a flatbed.  He is fixing it up so it will be perfect when he turns 16.  First thing he did was hang a raccoon tail from the antenna and declared that if the girls don’t like that then they aren’t good enough for him. 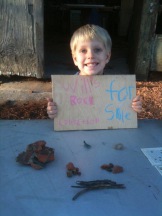 At age 5 he was selling his rock collection to my customers whenever he had a chance.  He also sold old broken bottles with sunflowers in them.  Later he sold "Redneck Weapons" consisting of blowdart guns (made from Straws and toothpicks with earcleaner tips) and Frog Giggs (made from bamboo).

Then by the age of 9 when he wanted to sell his go-cart and buy a 4 wheeler, he started hand splitting firewood and selling it.  That moved up to knives  and forged fajita flippers by the age of 10.  At 12 he had purchased two different 4 wheelers and 2 different dirtbikes and was making a $200 a month payment to his favorite banker - Mom.

BTW - thank to all the local residents who encouraged him by purchasing these items just because a cute little kids was trying to make a buck.

Below is an album of some other aspects of Will's life.

When you cross the RR Tracks, take an IMMEDIATE Left into our gate.  It is a long drive that parallels the RR tracks.

It's always best to call before you come to make sure I am home.

We are here...unless we're not.

I prefer text over email.

We are usually here during daylight hours.  However, we can be here most any time by appointment.  Just call and we'll be here when you need us.